18 Reasons to Visit the Faroe Islands

The Danish islands tucked between Iceland and Norway have been named a must-visit destination by Condé Nast Traveler. And with two luxe-adventure journeys that stop in their capital, Tórshavn, you can see for yourself how these islands are a great experience.

Think of them as Iceland’s quirky cousin.

If you haven’t already heard of the Faroe Islands, you will soon. Tucked between Iceland and Norway in the North Atlantic Ocean (and politically part of Denmark), this self-governed group of 18 volcanic islands is fast becoming a favorite Nordic destination. Music lovers may already recognize the region for its festival scene—it typically hosts five live music festivals throughout the year—but adventurers are also starting to catch wind of the archipelago’s steep cliffs, hiking trails, waterfalls, and rocky coastlines. And for Instagrammers, there are more than enough sites to keep you snapping photos (hello, puffins and grass-roofed houses). Here are 18 reasons to pack your coat and head to the Faroe islands.

This gallery has been updated with new information since its original publish date. 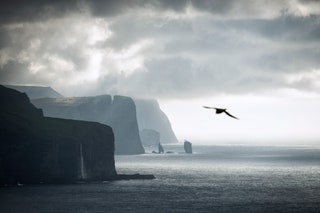 You don’t have to worry about crowds (yet).

The 18 islands have a total population of around 50,000—a drop in the bucket compared to Nordic neighbors Sweden and Norway or tourist-heavy Iceland. Faroe Islands tourism arrivals were around two million visitors in 2019, and American visitors alone already outnumber the locals. 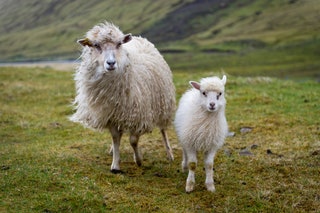 Good news for people desperately seeking sweaters, or who simply find wind-blown hills filled with lambs to be pure magic. In 2016, the Faroese even turned to these trusty residents to serve as a four-legged tourism board, strapping cameras to some of the sheep to capture footage for Google Street View, calling it—naturally—Sheep View 360. 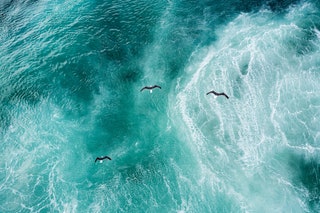 You can now fly directly to Vágar Airport (the only airport in the Faroe Islands) from Edinburgh, Reykjavik, and Copenhagen on Atlantic Airways; or you can fly directly from Copenhagen on Scandinavian Airlines (SAS). If you can find a good flight deal to one of those cities, the flight over to the Faroes will usually only set you back about $120. 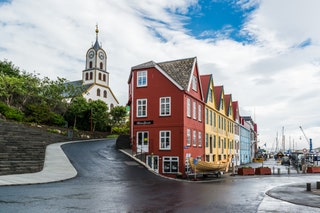 The capital of Tórshavn (pop. 13,083) is also the largest city on the Faroe Islands, settled behind a busy harbor on the east coast of Streymoy Island. Within the 66.8-square-mile city are eighteenth-century churches, a handful of museums, a tiny Old Town, and rows of brightly painted houses. 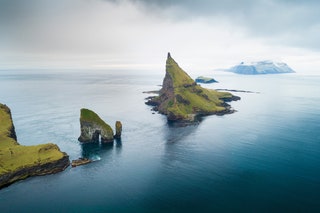 The archipelago has the type of striking views typical of volcanic islands, like windswept mountains, crashing waves, and jagged coastlines like the rock formations of Drangarnir, (pictured) the name of two sea stacks between Tindhólmur and Vágar. 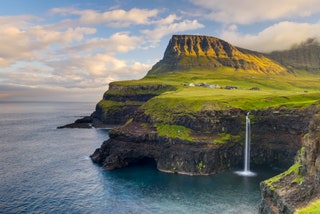 Scan some Pinterest travel boards or do a quick “Faroe Islands” image search, and chances are you’ll see more photos of Mulafossur Waterfall than any other site on the archipelago. The waterfall is like something from a fantasy novel, falling over the rocky cliffs of Vagar Island to the ocean below, with the the green hills of Gásadalur village as a backdrop. 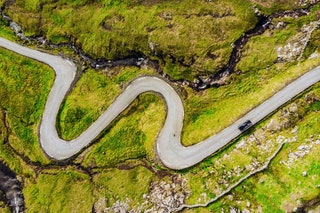 Despite their remote location and rugged terrain, it’s easier to road trip and island hop around the archipelago than you might expect. Thanks to relatively new infrastructure, like sub-sea tunnels connecting islands and paved roads cutting through mountains, getting to all of the country’s best attractions has been relatively easy since the early 2000s. 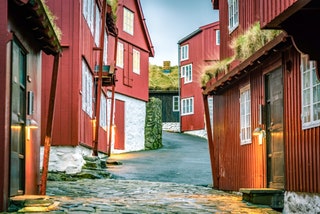 The Faroese have a word, “heimablídni,” which translates to “home hospitality,” and you can find that hospitality all over the islands. In fact, the nation has a program in which tourists can have dinner in locals’ homes, eating traditional food and hearing stories about their particular village. (You can learn more and sign up here.) 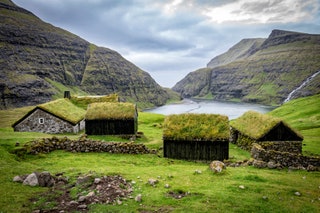 Aside from Mulafossur, perhaps the most iconic landscape in the country is the Shire-like village of Saksun on the northwestern coast of Streymoy. The hamlet and its mid-nineteenth-century church sit in a natural amphitheater above a lagoon, with views of mountains stretching in every direction. 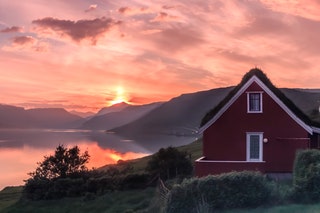 The Faroe Islands made headlines in 2019 when they launched the “Closed for Maintenance, Open for Voluntourism” campaign, in which the Faroes completely closed to tourists—aside from 100 volunteers chosen to help preserve the nation’s lands. For the 2020 event (which was rescheduled for 2021), 5,886 people signed up to volunteer within the first 24 hours of registration, so the campaign is likely to continue on for years to come. 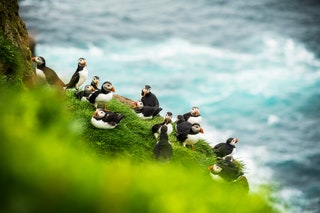 If you’re dying to see the most laughably adorable bird on the planet, there’s no place better than petite Mykines. While only 14 people live on the westernmost Faroe Island, its rugged terrain and precipitous cliffs draw thousands of breeding puffins during the summer months. 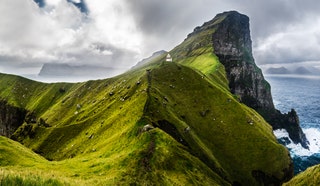 Take Kalsoy, a long, slender island with verdant hills and vertical cliffs, is just one of many hiking options in the Faroes. The best way to enjoy this particular island is to hike to Kallur Lighthouse, which sits on a northern promontory and grants panoramic views of five other islands (on clear days). 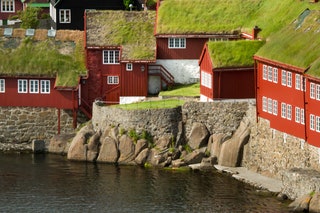 Turf-roofed houses are something of a symbol of the islands, appearing everywhere from sporadic seaside villages to the capital city of Tórshavn (pictured). They are more than just Instagram fodder, however: The Faroese use the architectural style to protect dwellings from the rainy climate (300 rainy days per year is no joke). 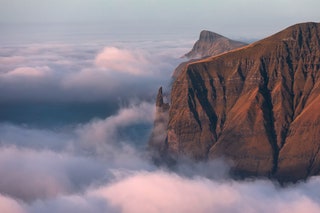 One of the most popular excursions in the Faroes are boat trips to the Vestmanna bird cliffs—rock walls that rise nearly 2,000 feet above the Atlantic waters on Streymoy Island. Day-trippers can enjoy the impressive sight of moss-speckled sea stacks, dark grottoes, and thousands of birds that nest here during the summer. Another famous cliffside site is Trøllkonufingur (pictured); translating to “Trollwoman’s Finger,” the 1,027-foot monolith juts off the southeast side of Sandavágur. 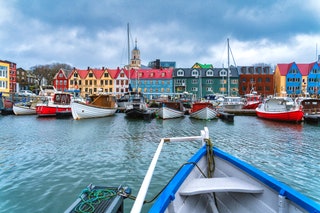 Europe’s major cities are known for their high-energy music festivals, and the Faroe Islands offer their own version of that tradition—albeit a way more low-key version. Each summer the three-day G! Festival draws crowds to the seaside village Gøta on Eysturoy with a lineup of electronica, folk, and pop performances. (The festival was canceled this year due to the pandemic, but it plans to return in 2022.) 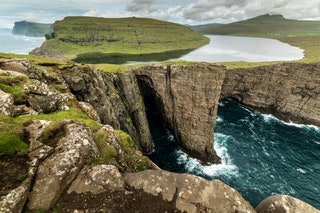 An optical illusion come to life

Lake Sørvágsvatn, the largest lake in the Faroe Islands, looks like it’s perched hundreds of feet above the ocean and tilts outwards—but this is actual body of water an optical illusion. In actuality, the lake sits in a deep depression about 90 feet above sea level. The steep cliff in front of the water (and high camera angles) gives the body of water its seemingly impossible “floating” appearance. 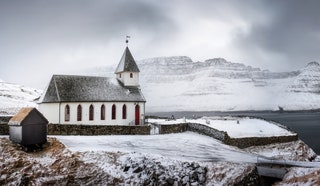 Winters are surprisingly mild here, with temperatures rarely dropping below freezing. But when the islands and villages are graced with a dusting of snow, they somehow look even more magical than they do during the green summer months. Just be sure to get a peek during this season’s narrow five-hour windows of daylight, which occur from November to January. 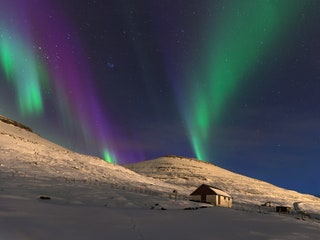 The Faroe Islands are far enough north to see the Northern Lights in all their glory—weather permitting, of course. Some good viewing spots are the villages of Gjógv on the northern tip of Eysturoy, and Klaksvík on Borðoy (pictured). The best time frame for spotting them is from September to March or April. 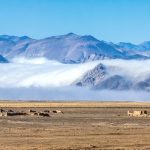 Refreshment in the Desert Previous 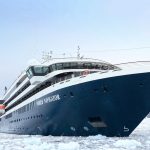 The Best New Cruises in the World: 2022 Hot List Next

Sign up and be the first to know about special offers, new itineraries, new products and more.