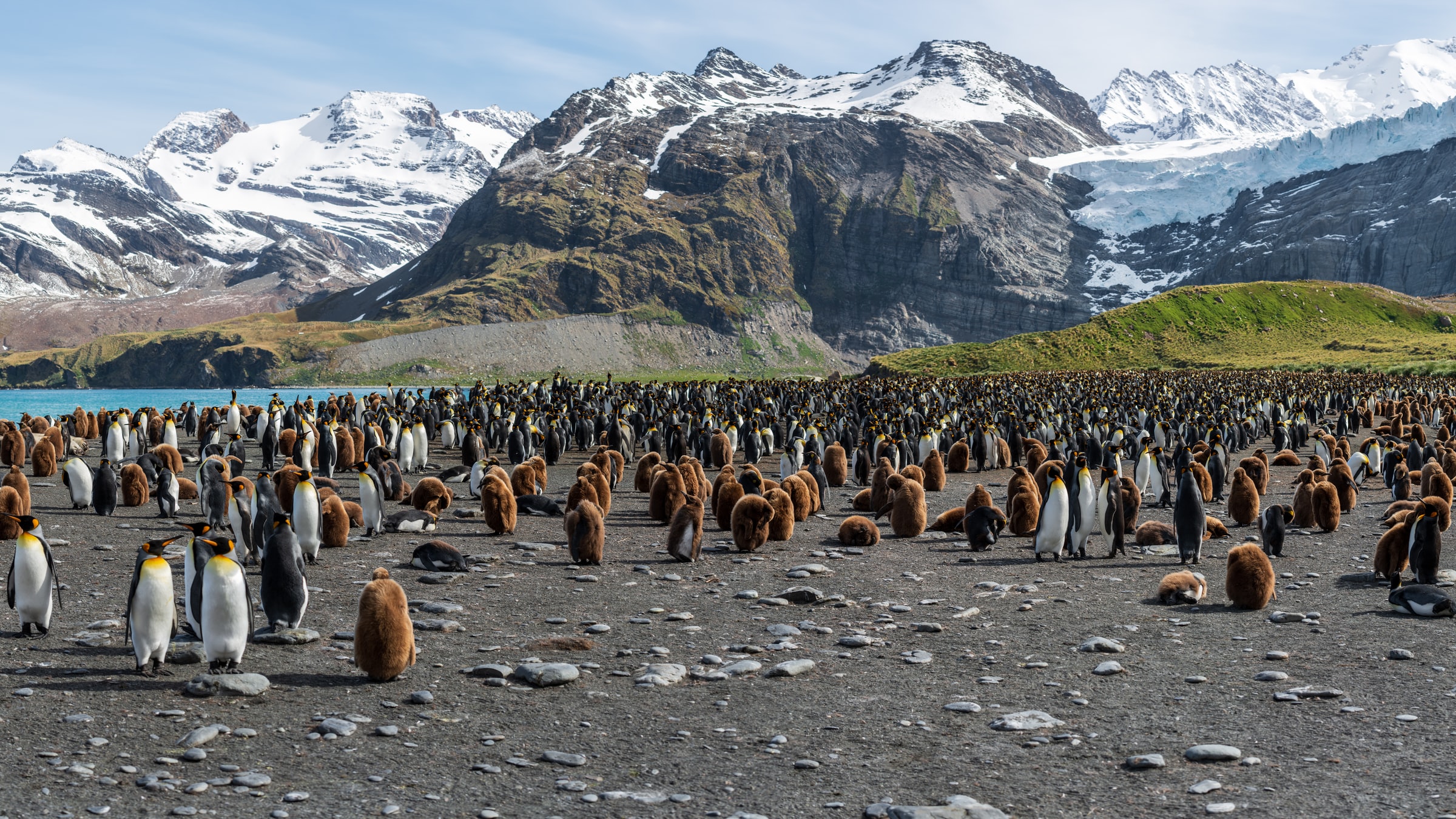 The penguins of Antarctica are one of the main attractions for travel to The White Continent. But before you start trekking the icy paths to waddle alongside them, here are a few things to know before you go about the whimsical birds of the seventh continent.

Antarctica: Empire of Penguins and Where to Find Them

Antarctic Peninsula – Watch for various species of penguins making their way across the ice, from the Gentoo to the chinstrap penguin. You can recognize the Gentoo penguin by its black back and head with a white stripe across the top from eye to eye and a bright, orange beak. Gentoos stand at up to 35 inches tall and weigh up to 18.7 pounds. Meanwhile, the aptly named chinstrap, stands out with a thin, black stripe around its chin, and stands at up to 27.5 inches and weighs up to 13.2 pounds.

South Shetland Islands – This is the site of Penguin Island, home to Adélie penguins. Standing at up to 27.5 inches and weighing up to 12 pounds, the Adélie is among the smallest species of penguin. But watch out for their flippers. These tiny penguins have a lot of might and have been known to slap anyone who gets too close.

Falkland Islands – The Southern rockhopper and Magellanic penguins make their home among these islands. Rockhopper penguins, named for their preferred environment of the rocky islands north of Antarctica, are sometimes confused for Macaroni penguins. While the Macaroni penguin has a yellow crest, Rockhoppers have tufts of yellow feathers on the sides of their heads. Rockhoppers stand at up to 21.7 inches in height with up to 5.5 pounds in weight. They’re among the smallest species of penguin.

Magellanic penguins, however, have a classic black and white appearance all around, with black backs and heads, white bellies and a thick, black stripe all around their chests. These penguins can reach up 29.5 inches in height with a weight up to 14 pounds.

South Georgia & the Falkland Islands – While you can find Adélie, chinstrap, rock hoppers and Gentoo penguins by the droves here, the true rarity are King penguins. These tend to stay more inland, so if you spot a tall penguin by its pale, yellow accents along its chest and head, you’ve caught site of the elusive King. These truly live up to their name, standing at up to 39.4 inches (that’s over 3 feet!) and weighing up to 35.3 pounds.

Ross and Weddell Seas – Emperor penguins, standing at heights of up to 48 inches and weighing up to 99 pounds, are the largest penguin species and live exclusively on the Antarctic continent. They are the only birds in this region that breed during the winter. Because the nest inland away from the coast, they are a rare sight for the intrepid explorer. To spot one is truly a once-in-a-lifetime experience.

How are penguins from Antarctica affected by travel?
The good news is penguinologists (yes, this is a real profession) have not seen any major differences between penguins visited by tourists and those that remain virtually isolated from human contact. But that is why it’s so important to maintain sustainable practices when exploring these delicate ecosystems.

Are penguins among the endangered species list?
Antarctic penguins remain safe on the list of species set for survival. Thanks to precautions taken to reduce environmental impact during travel, Antarctica maintains its status as one of the least affected destinations on earth.

Do penguins fly?
Penguins in Antarctica developed a more enhanced diving ability as they evolved to their isolation. Flying is not a capability they need much of as they live in remote areas with few predators that can catch them on land. But diving helps them navigate the Antarctic waters and fish for food.
Catch sight of some penguins on one of three Atlas Ocean Voyages itineraries to Antarctica.